I've written previously (here and here) about the issues with private companies merging in an acquihire or other downside scenario (i.e. one company running out of cash and another with cash but searching for a business model).  Often times those involve trading within a venture capital portfolio or between two venture firms portfolios.

But what about the case where both companies are well capitalized and doing well?  I think we will see more of these in 2016 and beyond as IPOs are still far and few between and unicorns struggle to justify their stratospheric valuations. 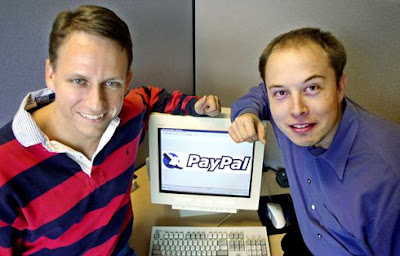 One of the first I was exposed to was the merger between Peter Thiel's Confinity/PayPal and Elon Musk's X.com.  Both companies were relatively well capitalized, building peer to peer payments businesses and spending a significant amount of their funding on customer acquisition.  According to David Sacks (PayPal's COO at the time), both companies were involved in a scorched Earth battle to acquire customers (upping referral bonuses to $20) that neither were likely to survive if they continued down that road and the merger solved this problem (although created others).

Obviously, Musk and Thiel both did fine off the eventual Paypal IPO (and even better subsequently with Facebook and Tesla).  Musk was the early winner taking the CEO role (for a brief period) in the merged company and the largest equity stake as well.  Not surprisingly, the merger was highly dilutive, particularly to Confinity/PayPal shareholders.  I was a Limited Partner in Angel Investors II (Ron Conway's angel fund) that was an investor in Confinity.  At the IPO, Musk held a 14.2% stake vs Thiel's 5.6% (Sequoia Capital had 10.7%).

For the LP's in Angel Investors II, the investment ended up returning around 7x (but only 1% of the fund), which was a very good return but not as high as it could've been, and clearly not enough to make a dent in many of the other 150+ companies (most that went out of business) in a portfolio that included candybarrel.com, eRugGallery, and dunk.net.  Luckily, Google was one of the 150 and did ultimately return the fund assuming the LP was smart enough to hold the stock after distribution.

I originally got to thinking about this when I received a 485 page information statement on a previously announced merger between Clean Power Finance and Kilowatt Financial.  I was a seed investor in Clean Power Finance (CPF), which subsequently raised $90M+ in venture funding and  over $1 billion in project and debt financing.  CPF's major venture backer is Kleiner Perkins, who coincidentally, is also the majority equity holder in Kilowatt.  Like CPF, Kilowatt also provides solar financing services to consumers.  It is obviously too early to know whether this will be a successful merger, but I generally prefer to roll the dice with the original horse I bet on.  You also have to wonder about the numerous conflicts of interests involved in a deal where one investor owns a significant stake in both parties.

Another seed investment where something similar happened was the 2010 iControl Networks merger with uControl (yeah not a lot of creativity in naming...).  Kleiner was also the lead venture investor in iControl, which had raised close to $50M in financing at the time (I previously wrote a post about iControl's financing history).  Both companies offered home security and automation services through partners.  iControl had make significant inroads in the security industry (partnering with ADT to deliver ADT Pulse) while uControl had more success with cable and broadband providers.  As an investor, I wasn't very excited at the time due to the dilution and challenges in integrating the two platforms.  Looking back five years later, it appears that the merger was a very expensive partner acquisition strategy for iControl.  By the way, this month is the 10-year anniversary of iControl's Series A financing and I haven't been able to get liquid on a single share.  Hope that changes in 2016...

What does this mean for entrepreneurs and investors?  Here are a few thoughts:

Back to that PayPal merger.  What would've actually happened if Confinity and X.com had continued to battle it out.  One thing I know is that the combined business turned out a lot better than Peter Thiel's original business plan for infrared beaming of electronic payments over Palm Pilots that I unfortunately passed on investing in 1999.  For those interested in an entertaining look back at Silicon Valley history, you can find that business plan here.

Thank you for sharing such a informative information with us. Keep on sharing the blog like this.


Quality articles is the key to interest the people to visit the web page, that's what this site is providing. paypal.com login

This article is wonderfully written!

Well written, you give here a lot of valuable tips. It's nice that I found this blog.

yes, its really amazing to read, thanks for sharing this type of useful blogs. emaar beachfront

its really very amazing to read this article, thanks for sharing. seo expert dubai

A brilliantly created article, if simply all bloggers look at your substance and addition from it than the web would be a clearly better spot. thankful and plz share your more updates.

No.1 Escorts in Delhi

i found the best reading blogs on google, thanks for sharing. perfumes online

I was surfing the net and fortunately came across this site and found very interesting stuff here. It's really fun to read. I enjoyed it a lot. Thanks for sharing this wonderful information.
interior design companies in dubai | engineering consultants in abu dhabi


Thanks for your thoughts. Travelers can apply online for their Turkish visa. e Visa of Turkey can get online via Turkish visa.By the time your application is complete, this new system has made visa processing easy and cost-effective for tourism and business travel in Turkey.

Thank you The foreign visitors need to apply for kenya e visa online. That offers them fast and secure visa services. You also can check the al information regarding to visa here to get in the Kenya.

Great article this is really informative and innovative: with new updates.with new updates. It was really valuable. Thanks a lot. Travelers can easily apply for Indian visa online. The Government of India has provided an easy-to-use method to apply for an Indian Visa.

The website is good and the stock is good. Thanks for all you do. apply for Indian visa online. It's too easy , fast and secure.It is called an electronic visa India system.

In the future, I am looking forward to reading more articles from you. Thank you for your insightful blog. Travelers can get information about visa India USA directly for e-visas online. In order for visa applications to be submitted online quickly and conveniently, the Indian government developed an online application.


Hello everyone, Tourists are welcome in India again. Now you can apply for India tourist visa online.

Keep an eye fixed out for your likelihood to earn these bonus free spins. First, there is be} an FAQ web page that provides answers to every question might have|you could have|you would possibly have} regarding bonuses, video games and software program, casino services, and so on. Also, there is a 24/7 Live Chat operate that tends to your needs faster, as you describe your issues/problems with a customer representative. This casino has quick become one of many vital and most popular playing destinations in Sweden ever since its establishment in 2011. Today, paysafecard casino offers some unimaginable services that many gamers 카지노사이트 love to see from a gaming venue. When all of the free spins were accomplished, it informed me I’d gained some- thing more than 12,000 credit.