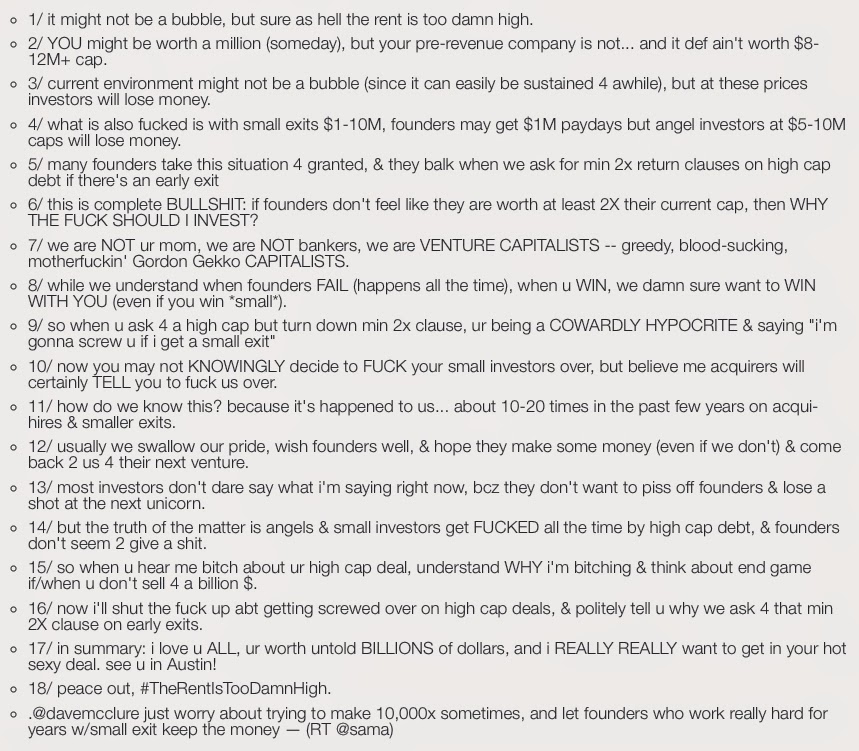 If you are interested in drilling deeper in to this tweetstorm or discussing any other entrepreneurial topics, I am hosting a fireside chat with Dave on April 1 (No Joke!) at the new SJSU Theatre on campus as part of our Silicon Valley Center for Entrepreneurship Eminent Speaker Series.  We are also looking to break the current campus record for most f-bombs in an hour.  The event is free and open to the public.  You can register here
Posted by Steve Bennet at 3:33 PM

Email ThisBlogThis!Share to TwitterShare to FacebookShare to Pinterest
Labels: acquihire, angel investing, AngelList, M and A

Great post, Steve. I, too, am a big fan of AngelList, but feel that the Syndicates model needs a lot of work. Why would someone invest in a company that they do not know with a Syndicate lead who they do not know with an unproven track record and potential undisclosed conflicts of interest and not legal fiduciary obligation based on an unverified skimpy company profile with the likelihood of receiving few, if any, shareholder updates. And, oh yeah, your investment will like be illiquid for at least 7 years, and you are most likely to lose money on the investment. Who would invest in such a scenario? Yet, $100mm was investing through this model on just that one platform last year. Seems crazy to me. I predict a sea of red in investment losses from crowd angels with media and regulatory blowback down the road. But, that may take 5 years to materialize. Surely, there will also be a few big winners, but the vast majority are losing money investing through these vehicles, IMO

Exactly!! Of course, that is not any different from the losses most angel investors suffer. You need a diversified portfolio of at least 25 investments to expect good returns and if you are paying fees and carry, will impact those returns.

Also an update: AngelList is scheduling a call with the investor group (3 weeks after the fact) to address investor concerns with the deal.

Awesome review, I am a major devotee to remarking on web journals to advise the website essayists realize that they've added something beneficial to the internet!.. click here

SEO services are one of the best services that digital marketing has provided for local business & entrepreneurs. look at here now Clients can do simple updates, but anything technical would need the assistance.

We went through your website carefully and understood the article, you have published very relative information.
Thank you for this article. Live Stock Market

On most slot machines, the jackpot is ready at onerous and fast|a set} quantity, but progressive slots let the jackpot rise as you play. This web site presents progressive games in each its video and basic slot games, meaning that 메리트카지노 there are numerous totally different choices depending on the kind of cash you’re seeking to play with or win. Remember, might be} additionally the play free of charge choice, permits you to|which lets you} play sure games with out utilizing any actual cash. So you will get get} used to model new} game or try out your strategy with out risking actual cash. They rely on random number generator software to find out} their winners, and these are revealed by way of the symbols on the display screen. To win at video slots, matching symbols must line up across active paylines.