Is the Unicorn Endangered or Extinct?

Before diving in to the topic at hand, I realize Professor VC has been gone for a long time. Although I don't blog for the sake of blogging, I am committed to writing more regularly this year.  In fact, that was one of my New Year's Resolutions for 2015.  My other was going to the eye doctor and I have an appointment for this coming Monday. Nothing like checking off your resolutions in the 2nd month of the year!

My favorite podcast is This American Life, hosted by my business school classmate Karen's brother, Ira.  It is hit and miss from week to week, but stories are well researched, interesting, and often downright hilarious!  One of my favorites is a Little Bit of Knowledge (Episode 293) that has stories on people who believe certain things such as childhood myths well past the age when they should.

In the episode, Kristy Kruger talks about picturing unicorns roaming the planes in Africa as a kid and being at a party many years later when the topic of conversation turned to endangered species:

It was about a group of five to seven people, kind of standing around the keg, just talking. And somehow a discussion of endangered species came up, in which I posed the question, is the unicorn endangered or extinct? And basically, there was a big gap of silence.

I doubt Aileen Lee of Cowboy Ventures believed that a horse with a horn existed when she wrote Welcome To The Unicorn Club: Learning From Billion-Dollar Startups in late 2013, but she probably had no idea that it would become a hot buzzword in Silicon Valley and hit the cover of mainstream business press, Fortune Magazine. 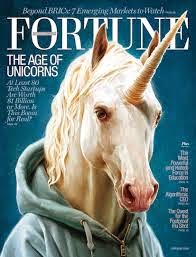 The subtitle on the cover asks the question "At least 80 Tech Startups are Worth $1 Billion or More?  Is this Boom for Real?" Before answering this question, it is good to at least address the B word (no not Billion, but Bubble).  When I pulled the current issue of Fortune out of my mailbox, it reminded me of my reaction to another Fortune cover almost 10 years ago. 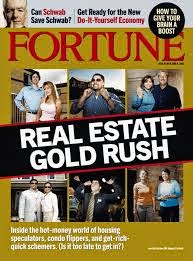 When I pulled out the May 30, 2005 issue with Real Estate Gold Rush on the cover and posting the question "Inside the hot-money work of housing speculators, condo-flippers, and get-rich-quick schemers. Is it too late to get in?"  My thought was not whether it was too late to get in, but how quickly one could get out! The article profiled one of the flippers:

"Zareh Tahmassebian is on the way to look at two of his houses in Phoenix. He is lost. Most people don't get lost driving to their own residence, but then, Tahmassebian has never actually been to these particular homes. There are a few reasons for that: (1) He has no intention of ever moving into them, (2) he lives in Las Vegas, not Phoenix, and (3) he owns six other houses--and a half share of seven more--in the greater Phoenix area. "Sometimes it's hard to keep track," he says.  Tahmassebian, just 22, is a big, affable guy who dresses the way a budding young speculator should: black trousers, a blue-and-white-striped shirt, cuff links, a Cartier watch, black suede loafers, and rimless purple sunglasses. The son of Armenian immigrants, he has spent the past four years in Las Vegas working as a mortgage banker, a job that he says paid him $250,000 in salary and commissions last year."

I'm not about to compare the current state of private company valuations to the real estate bubble or even the dot-com bubble.  The real estate bubble was practically a Ponzi scheme driven by greedy (is there another kind?) investment bankers, while the dot com bubble was driven by investment bankers willing and able to convince institutional and retail investors that companies didn't need to have a business model or even a way to exist without relying on additional investment.

No, the question today is not whether these unicorns are viable businesses.  For the most part, they have proven that.  The question is whether the valuations can be supported.  For example, Uber (not a startup but someone should let TechCrunch know) is private and has a valuation greater than 70% of the Fortune 500.

Back in the day, tech companies typically went public at market caps in $100 - $250M range.  Late private and early public investors were richly rewarded.  With companies remaining private much longer today, most of the value appreciation is pre-IPO.  I don't think the intent of the JOBS Act was to have companies remain private longer, but has had this result by increasing the investor limit prior to required reporting.

Former students who are readers of this blog may recall the Amazon IPO case from Entrepreneurial Finance class.  Amazon priced it's IPO in 1997 at approximately $500M (the $18 IPO price was an increase from the $12-$14 range) and first trade was at $29.25 or a market cap of $800M.  It's previous financing round was a little over a year prior to the IPO and was a $8M raise at a $60M pre-money valuation led by John Doerr of Kleiner Perkins.  Kleiner got a markup of approximately 12X at the IPO.  However, the bulk of the gains were earned post IPO as Amazon's current market cap is $175B or a 2,500X increase from the IPO.  If Uber were to go public at its current private valuation, it would have a market cap of $100 Trillion.  No company has ever crossed the $1 Trillion threshold.  That wouldn't be a unicorn.  That would be a unicorn mermaid and cyclops all rolled in one!

Again, we are talking about Amazon, a company that has completely disrupted the business of retail commerce among other things.  We should also remember that Amazon went public at a time (Q2 1997) when many companies were pulling IPO filings because the market was beating up Internet valuations.  In the year prior to Amazon's IPO, 23 Internet companies had gone public at valuations ranging from $63M to $485M, including Etrade ($380M), CNET ($211M), and First Virtual (79M).  At the time of the Amazon IPO, most of these were trading at prices 50%+ less than the IPO price.

"Warren Buffet has a famous quote, 'Be fearful when others are greedy and greedy when others are fearful.' Using this traditionally contrarian investment mindset, one would certainly tread with trepidation in today’s market. Although we may have not reached the level of observing obvious greediness, there is most certainly an absence of fear. Those that managed companies in 2008 or thirteen years ago in 2001 know exactly how fear feels. And this is not it."

This also gets me thinking of the old poker adage:


"if you are sitting around the poker table for 30 minutes and can't figure out who the sucker is, it's you."

I'm a pretty good poker player but can figure out relatively quickly when I'm outmatched.  I don't want to be the last money in or the guy holding the bag.  Recently, I was given the opportunity to invest in unicorns including Dropbox, Lyft, Palantir, and Spotify.  I passed on all.  Not because they aren't excellent companies, but primarily based on valuations.  Is Dropbox at an $8B private valuation worth 4X more than Box as a public company?

For Lyft, it is much more painful.  I was an informal advisor to the founders from the time they were the only two employees.  In 2008, I made an investment offer of $250K for approximately 38% of the company ($400,000 pre-money valuation).  The current valuation of $2B is 3,000X the proposed post-money valuation of that seed term sheet. (igthwghjg2q2g8hu4). Sorry about that.  Just needed a good cry on the keyboard...Logan and John were wise to turn down the offer and continue to bootstrap Lyft (Zimride at the time).  However, I imagine we could've gotten the deal done at a valuation in the $1M range.

Yes, I do believe that late stage valuations are out of whack but remain excited about early stage opportunities.  Also, as the secondary market continues to mature, there will be many more opportunities to get liquid while companies are still private, reaping the rewards that early public investors would've had in days gone by.

Now back to our friend, Zareh, from the real estate flipper article.  I was curious to find out what happened to him.  I couldn't find a linkedin profile, but a quick google search did turn up a number of lawsuits and foreclosures.

If it sounds too good to be true, it probably is.  Just like Unicorns as imagined by a child.
Posted by Steve Bennet at 3:29 PM

SageSupportNumber.Com is a US-based company that has grown into an internationally recognized provider of accounting support services with a highly regarded client base..


You can Check it out and find out what the truth of this story is, the blog title makes me curious and I think this is a smart way to raise questions, stimulate the curiosity of readers.