Give Us Your Tired, Your Poor, Your Talented Entrepreneurs

"Give me your tired, your poor,
Your huddled masses yearning to breathe free,
The wretched refuse of your teeming shore.
Send these, the homeless, tempest-tost to me,
I lift my lamp beside the golden door!"

The Statue of Liberty has seen better days. The harsh reality is setting in as we are two days away from the start of the Trump administration (or perhaps five days since Donald wants to take off his first weekend and get a fresh start on Monday).  With a lot of uncertainty regarding immigration policy in the days ahead, we are really excited to be launching a Global Entrepreneur in Residence program at San Jose State, where immigrant entrepreneurs will have the opportunity to build their companies on campus.

I'll share more information on the program later in this post, but first a little background on why I am so excited.

It is no secret that the U.S. immigration system is broken and even with bi-partisan support for fixing, political gridlock in Washington has prevented any shot at comprehensive immigration reform.  It would be great to give Dreamers a path to citizenship and provide protections for farmworkers, but that is a huge hill to climb.  A solution to the H1-B problem is also extremely challenging, but is more manageable.  USCIS grants just 85,000 H1-B visas annually and applications representing a multiple of that number are received by April 1 (an appropriate date for those that apply given the current system), the first day they are accepted.  The chart below shows when the cap has been reached in the past 13 years, and no difference is expected in 2017. 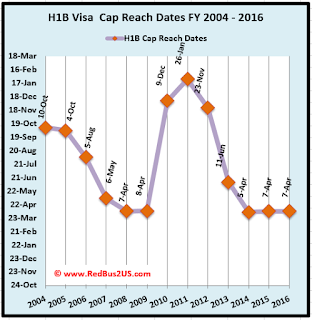 I represented SJSU as part of a delegation led by the Silicon Valley Leadership Group on an advocacy trip to Capitol Hill and the White House in the beginning of Obama's second term and wrote about it here.  On the trip we met with a number of members and staff of the Senate, House, and White House staff and discussed the possibility of an entrepreneur visa and expanding the H1-B caps.  At the time, there was some optimism that comprehensive immigration reform could happen, but it soon became clear that was a pipe dream.  A number of other VC's and tech CEO's also made similar trips at the time.

In 2015, Brad Feld of the Foundry Group wrote about his similar frustrations with visas available to immigrant entrepreneurs and the launch of the Global EIR Coalition with Jeff Bussgang of Flybridge Capital.  Jeff had spearheaded the initial Global EIR program at UMass Boston with support from the state and was able to have the program included in their 2014 Jobs Act.  Brad subsequently funded a Global EIR Program at University of Colorado and together they helped launch the Global EIR Coalition, which is supporting our program at SJSU.

In a nutshell, the Global EIR program solves important problems for the entrepreneur and university. By building their companies on campus or being employed by and supporting part of the core mission of the university, entrepreneurs are able to apply for a cap exempt H1-B visa.  Given the numbers in the chart above, this is huge for the immigrant entrepreneur.  I have seen cases where more than one founder has a visa issue and one is successful in the lottery and the other isn't.  There are enough founder dynamic issues in startups that this definitely doesn't need to be part of the mix.


For the university, there are multiple benefits to student success that can be attributed to this program.    Global EIR's will be conducting workshops on a variety of startup topics and holding office hours to work directly with students' projects and startups.  They will also be supporting our various programs, such as the Silicon Valley Innovation Challenge, Business Plan Competition, Venture Lab, Entrepreneurship Lab, hackathons, and numerous classes.  The ability to track the progress of multiple startups over the course of an academic year is a great opportunity for students (and faculty).

However, the benefits expand well beyond the ivy walls of the campus.  The UMass Venture Development Center prepared the above infographic on the economic impact of immigrant entrepreneurs on job growth and the barriers to blocking the entrepreneurs from building their companies in the U.S.  For example, there are 31,000 international graduate students in Massachusetts and a majority plan to start a business after graduation.  Sadly, over 90% of the students intend to return home, many due to the inability to get an H1-B visa.  It just makes no sense to educate students and send home after graduation.

Since UMass and Colorado launched their Global EIR programs, 11 other colleges and universities have launched programs.  San Jose State is the first in California.

We are now accepting applications for Global EIR's here.  Please send us your tired, your undercapitalized, your talented entrepreneurs.  Also, if you are interested in supporting our efforts, financially or otherwise, email me at steven dot bennet at sjsu dot com.