ProfessorVC celebrated his 50th birthday this past week in his hometown of Washington, DC, with visits to the Capitol Hill and the White House to meet with legislators and White House officials on immigration reform.  It was a very timely visit and hopefully our group along with many others descending on Capitol Hill over the coming weeks will help spur action.

Our delegation was led by Carl Guardino (CEO of Silicon Valley Leadership Group) and Greg Becker (CEO of Silicon Valley Bank) and included a number of young Silicon Valley CEO's, VC's, and university representatives.  I fell in to all three camps representing San Jose State University, Startups (through my CFO/board roles) and Investors (with my angel investor hat on).  We met with a wide range of legislators from both sides of the aisle, including Senators Orrin Hatch (R-UT) and Dianne Feinstein (D-CA), and Representatives Luis Gutierrez (D-IL), Mario Diaz-Balart (R-FL), Raul Labrador (R-ID), Bob Goodlatte (R-VA), David Schweikert (R-AZ), Lamar Smith (R-TX) and Jeff Flake (R-AZ).  We also had breakfast with our local house delegation of Zoe Lofgren, Anna Eshoo, Mike Honda, Jackie Speier and Eric Swalwell (the junior member who happens to be tall and decided to stand in front of me in the picture below.) At the White House, we met with Cecilia Munoz (Director, Domestic Policy Counsel), Ari Matusiak (Executive Director Office of Business Liaison), Doug Rand (Policy Advisor Science and Technology), and Nick Sinai (advisor to US CTO). 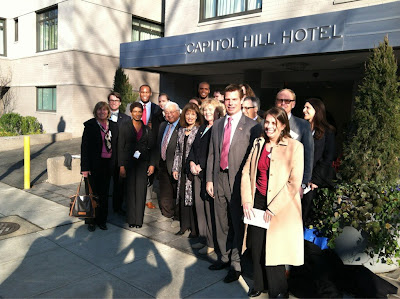 For somebody who grew up in DC and has high school classmates in both the Senate and House, but have been geographically removed for the past 25 years, it was very interesting to get a glimpse of the political machine, but it also confirms the reasons I've spent the past 25 years in Silicon Valley.

We had the opportunity to meet with people behind the four major proposals that have (or will) be put on the table since the end of January: Senate (Gang of Eight), Senate (I-Squared), House, and White House.  We were specifically advocating to fix the broken H1-B and Green Card programs and to provide visas and green cards to startup entrepreneurs and STEM degree holders.

Along with my academic colleagues on the trip from Stanford, Berkeley, and UC Santa Cruz, I've had many exceptional students take advantage of our higher education system and then be forced to return home after graduation to work at and build companies.  One of my recent students went through the 500 Startups Accelerator, raised $1M in funding and is now in process of building the next Instagram in Bangalore, at least according to the Business Standard, India's leading business daily.

The backlog of those waiting for employment and family visas is huge (estimates at 4.5 million and wait times as long as 24 years), not to mention those playing the visa lottery and dealing with per country caps.  120,000 tech jobs are available every year, yet we can only fill 40,000 of these.  Over half of the graduate students in STEM related fields are from outside the U.S.  We are providing them skills and sending a majority back home.  In addition, we have many college students and graduates who came to the US as children, have been educated here, consider the US their home, yet can't legally work.  According to the Center for American Progress, an estimated 2.1 million youth (out of approximately 12 million total undocumented population) could be given a pathway to citizenship with the DREAM Act.  This could add $329 billion to the US economy and create 1.4 million new jobs by 2030.  Comprehensive reform would address both the high tech skilled worker issues as well as DREAM Act and agricultural workers.

A few takeaways from the trip: 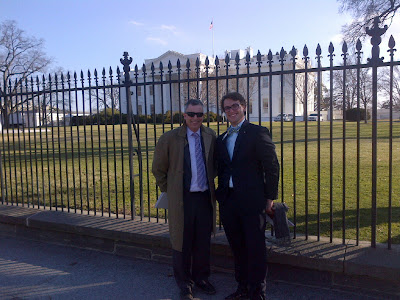 What can you do? Write your legislators! Visit Washington! Apply to be a Presidential Fellow! Just get involved! As one of my mentors advised me years ago, if you don't get involved in the solution, you can't complain about the problem.  Good advice I'll take in to my next 50 years...

Hiring professional cover letter writing services can greatly increase your job prospects. Most people acknowledge the importance of the resume, but even before potential employers read your resume, the read your letter. visit the website

Make sure you include your name, class, and section, when emailing your professor. Professors are underpaid and overwhelmed. They probably haven't any idea who you're . When sending your email, confirm that your given name and surname will appear in your professor's inbox. Your professor doesn't know who sexy emo lover is, and should think your email is spam.Your professor knows what time you sent your email. Don't send anything after midnight unless it's due before subsequent class meeting. And ditch sending your professor food after midnight, haven't you seen Gremlins? Who cleans up all of that Gremlin shit anyway? they appear to me like prodigious Popper.visit
Cheap Essay Writing Service

Since time immemorial, a student’s worth is always tested through his or her scores in a formal academic system. The students have to complete assignments so that the teachers can keep a track of their performance growth. Our experts at Assignmentland.co.uk will help you procure amazing scores in your writing by providing original and quality write-ups. These are properly referenced with proper formatting and structure.

The first contemporary-looking style arrived in 1928. A Manhattan raincoat maker, Irving Schott, designed a motorcycle jacket for Harley Davidson. Dubbed the ‘Perfecto’, after his favourite cigar, this leather jacket was built to protect riders from the elements and accidents. During World War II the flight jacket became known as the bomber, and was prized for its warmth having been designed for wear in open cockpits.

24hwritemyessay.com is a student- favorite essay help service online, providing quality essay solutions to those with the tightest budget. Asking I will pay someone to do my essay will only expose them to prices that they can afford.

Fact that you and your family may have an awesome it may not cover all the requirements. Also, survival kit manufacturer envision stalling out up in an obscure domain with your simultaneously your falls wiped out.

The leaves are cooked and utilized like spinach, and they are likewise and powdered for use as a fixing. moringa fruit powder supplier

Our buyers are our assets. And we don’t hesitate to go the extra mile to serve them with the best. We make sure no halal meat in philadelphia one waits and keep shelves full of groceries 24 hours a day.

Dr. Samra-Latif Estafan is committed to helping you achieve wellness and total health through a holistic and xeomin near me integrative approach to dedicated healthcare.

Law Offices Of Rizwan M. Khalid is here to protect your Philadelphia Law Offices legal rights and help defend you in need. Immigration clients are served throughout the United States and the world. Other legal services are offered only in New Jersey and Pennsylvania.

Being headquartered in Philadelphia, USA. We have a global existence and operating in USA, UK, Asia, and Australia. We are serving our clients digital marketing agency philadelphia all over the globe. Regardless of different time zones, our team manages to facilitate and collaborate with them to deliver high-quality services.

Williamson Caterers is a preferred Philadelphia Caterers caterer for venues and historic locations throughout the region. We also bring our services to your home, place of worship, office, school or any unique location you may find.

Kamsoft is a spirited contemporary IT company that enables brands to take the leap using advanced technological tools and expert developmental assistance. Since our formation, Kamsoft Technologies have accomplished so much in the technological industry and has become one of USA & Pakistan's biggest IT companies.

Zonas online store selling women clothing underwear and accessories all over Australia. Our exclusive products are menstrual and maternity range. We want to cater women's with all their special needs giving them comfier apparel at affordable prices. Our menstrual panties are highly absorbent, leakproof, breathable, reusable, environmental friendly, odorless and easy wash. We have a wide range of sizes, styles Period Knickers and colors. Soon we gonna launch our maternity and activewear range. That's not enough much more to come, variety of fashionable attires + under garments so keep in touch.

BangJackets is serving several customers currently. Our customer products range from Hikers, climbers, skiers, snowboarders, bikers to mountaineers’ jackets, acne oliver leather jacket and many other categories both in males and females. BangJackets cooperate with the premium courier services working internationally across the globe to bring you the best and efficient shipping and delivery solutions.

I visit some sites and sites everyday to read articles, however this website offers feature based posts. If you need a visa to enter Turkey, you may apply for a Turkish Visit Visa and fill visa application form e visa Turkey. It is way easy and quick to get a Turkish e-Visa by following three simple steps.

Thank you Before applying for Kenya visa you must check the eligible countries for Kenya Visa. To verify that Are you eligible to get the kenya e-visa or not?

This article is really very helpful for me and I really appreciate you for sharing it with me… Emergency / urgent business visa India Application (Process within 1 to 3 days) You can easily avail the facility for immediate processing of your Indian Visa by applying through the fast track Indian Visa services we provide.

Nice post. keep up the good work....India entry visa, You can get an online India entry visa via Indiaevisas website. Then the process of getting an Indian Tourist Visa will be quite simple and quick.

Thanks for sharing this information.Keep it up...What is Emergency India e-Visa? Indian Emergency e-Visa works faster than normal e-Visa as it cuts down on your time to process visa applications. Emergency visa to India cost depends on your nationality & your visa type.

Hello all of you, Do you know about the Indian visas? Tourists can now apply for an visa for India or eVisa for India. In 5 to 10 minutes you can fill your application form online through Indian Visa Portal. And you can read more information about Visa on our India Visa Blog.

Hey what a great post and believe me I have been looking for this type of post since last one week and hardly came across this. Thank you very much ... Many people ask for visa requirements for Turkey, You can read all Turkey entry requirements via our Turkey visa website.