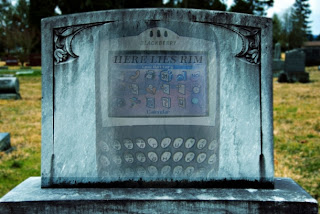 Over the past 15 years, I've probably been one of the most loyal blackberry users on this side of the Canadian border.  The running joke when I'd pull out my blackberry among a sea of iphones was that I was Jake Gyllenhall's character in Brokeback Mountain and my beloved blackberry was Heath Ledger.  "Blackberry, you sonofawhoreson bitch! I wish I knew how to quit you."  Well, I finally did it two weeks ago and entered the Android camp with a Samsung Galaxy S4.  I'm still getting used to the device and sorely miss the blackberry keyboard, but not much else. 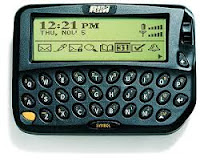 My love affair with RIM started with my first blackberry I purchased in 1998 - the fat pager pictured above. This was years before "crackberry" entered the lexicon and became a must-have for every ibanker and lawyer in a Brooks Brothers suit in New York along with the jeans clad techies and VC's in Silicon Valley.  At the time, it's only purpose was email and the occasional lighter substitution at a rock concert to beg for another encore. It wasn't the first time I had email on the go (see picture on the right), but was a much slicker solution than the combination of Ricochet wireless model and Palm Pilot (now there's a story to tell the grandkids - reminds me a bit of those annoying AT&T Uverse commercials).  I even had an unoffical antique museum or perhaps mausoleum to my beloved blackberries buried in
my desk drawer containing many retired devices.

I hung on to my Bold waiting for the very late arriving OS 10.  As the launch of the Z10 got delayed again, I finally began to consider the switch.  However, even up until a few weeks ago, I was considering hanging on for the Q10 to experience the slick new operating system and still have the trusty blackberry keyboard.

When the Z10 finally showed up in March, I paid close attention to the reviews and analyst reports.  I was even amused by the tête-à-tête between the Blackberry CEO and Analyst over reports that the Z10 was experiencing very high return rate.  I stopped in the local AT&T store to get my hands on the new device.  When the salesman approached me, I asked him about the phone and if they were selling a lot of them.  He gave me a look, scratched his head, and responded with "nope".  If you ever want to know how products are doing in the marketplace, often better off visiting the point of sale than reading a bunch of analyst reports.  With a dwindling market base, nobody is going to develp on the platform, which is a death knell for anyone in the smartphone business.  That was the final straw! I decided it was time for a divorce.

So where did Blackberry go wrong?  Where didn't they??? In addition to a number of product failures (Storm, Torch, Playbook) and a really crappy web browser, the biggest issue was probably the hubris of the founders.  Rather than anticipating or even coming up with a competitive response to the iPhone, the Co-CEO Jim Balsillie spent several years trying to buy an NHL team.  The other co-CEO  Mike Lazridis was famously quoted as saying that nobody would want "the equivalent of a personal computer on a phone".  I (and many others) believe the company could've been saved if it had adopted android several years ago.  In August 2010, Dan Frommer wrote an article declaring that RIM must switch to Android before it is too late.  At the time, RIM still had the leading share of the smartphone OS market at 18%, with Android (17%) and iOS (14%) close behind.  Shift to 3 years later and it's game over.  Android has 52%, iOS 39% with Blackberry (5%) and Windows (3%) with also ran status.  Once Windows passes Blackberry, it may be time for hari-kiri.

So what am I going to do with that desk drawer full of blackberries?  Not sure what I'll do with most of them, but I did put my most recent Bold up for auction on eBay and surprisingly someone paid $194 for it, only $5 less than I paid for my new Samsung S4.  Guess there are blackberry fans still out there, but can't imagine there will be for much longer.

My Bold 9900 (with OS updates) is and by far the worst phone (smart or otherwise) that I ever had. It can even get a decent cell reception in many areas!

This "phone" hangs a lot at the most critical times and a twice daily reboot is the least of my worries.

I had to hang around to it since I can't really afford anything else until now.

Its a crying shame really since I have been using BB's eversince they started.

During most days, my fondest wish is for the execs in RIM to also use the Bold 9900 and they will know what I am going through!

The arrival of the Z10 dan Q10 did have my hopes up a bit..but then its too little too late..

I have YET to see anyone using these devices despite them being in the market for a while now. Everyone it seems are using the S4 or the iPhone 5.

So, so long Blackberry or RIM or whatever u choose to name urselves later..u have now lost yet another loyal customer.

Oh ya..the Bold 9900 I'm typing this comment with showed the hour glass (square) TWICE in a space of a few minutes it took me to write. Had to wait and wait summore till I can resume.

I'm sure in years to come, the case of RIM and its two co-ceos (like a ship with two captains) will make it as a casebook in most business schools as to how NOT to run a tech business.

Thanks for the bitter memories. RIPieces.

boudoir photography ideas
Excellent and decent post. I found this much informative, as to what I was exactly searching for. Thanks for such post and keep it up. Thank you for sharing this information to people. Great blog.

Diesel Trucks for sale
Excellent and decent post. I found this much informative, as to what I was exactly searching for. Thanks for such post and keep it up.

Hi Steve,
My two cents on another great Canadian technology company failure can be found here:
http://contrariansmind.wordpress.com/2011/11/05/blackberry-rim-my-bold-pick-of-2010/
I hope you and your readers enjoy it...
All the best from beautiful Barcelona - The Next Big Startup Hub!
Jeff Robinson
@contrariansmind

Thanks for this but i am not sure if this is relevant in current scenario or it has got importance still to ponder upon.

It is great post to read. Thanks for sharing.

Outstanding and reasonable post. I ran across that much informative, about what When i MOTION CAPTURE SYSTEM has been exactly in search of. Appreciate it pertaining to such post and keep writing. Thanks a lot pertaining to discussing these records in order to people. Good blog.

I very like to read such posts sluts mature

I appreciated looking at your article. Very wonderful reveal. I would like to twit this on my followers. Many thanks!

An Introduction to Double Integral
Interpretation of a Derivative Calculator