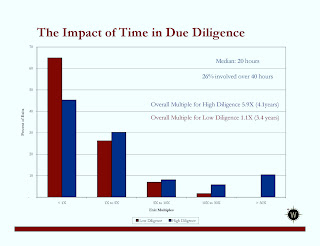 Not totally surprising, some of the early backers of RCSM are professional poker players, who obviously know a bit about playing the odds. I'm hoping this roll of the dice comes up 7's.
Posted by Steve Bennet at 11:11 PM

Keep up the good work. I strongly believe at least for very early stage technology ventures that you will get diminishing returns and arguably negative returns once you get past an initial threshold of team, product, market and financial diligence. There are so many unknowns at this stage and the only known is that the business model is going to change at least once, or in the current most overused term. The written style is very prompt and the highly practical manners.
work at home

Steve,
Love the comments and common sense that resonate within them. I've been working within the sphere of startups and angels for a couple of years in Vancouver, BC and it's been an interesting experience...a story for another day. I appreciate your thoughts here on Due Diligence as it's been a question of mine for a few months now. One thing I've noticed, DD certainly seems to be an oft used way for angels to avoid/stall or manipulate the process of making a decision.