Has DEMO lost it's luster and relevance in 2010? I spent the past couple of days at the conference and certainly felt like it. There wasn't a lot of buzz in the air. This was the 20th Anniversary and possibly the last.

DEMO has always been one of my favorite tech conferences. All product, all the time. You can always check out the current and prior product demos at the DEMO site. The conference has launched a number of great companies including Tivo, WebEx and Palm, and historically draws top press and investor attendees. Also puts a ton of pressure on the CEO's to have a well rehearsed 6 minute pitch and hope that they don't end up in Demo Hell. One poor guy completely blanked on what his company did and after stammering for 20 seconds, pleaded with the crowd to come to his booth and find out what they do.

With all of the new ways to see early companies such as TechCrunch and YCombinator, I had a feeling that much of the luster was gone and debated whether it was worth the time to attend.The last time I went to DEMO was in 2005 for the launch of one of my companies, iControl Networks. It was the 15th anniversary and they made a big deal branding the event as Demo@15. This year, there was no swag to be had, although did bring home a couple of vuvuzelas from the nice guys at Loud3R. No conference bag, fleece jacket or even a t-shirt and the only mention of the 20th anniversary was a small sign off to the side by the entrance. The conference has also become a hand me down, passed from Stewart Alsop to Chris Shipley and now to Matt Marshall. This year, for the first time, the conference was in Santa Clara (rather than the normal dessert resort location), close to home, so decided to attend.

My fears were met on Day 1 with many presentations being unpolished, several me-too ideas and a general malaise. To be fair, the Day 1 categories were primarily infrastructure companies (Enterprise, Cloud and Mobile). Day 2 featured the consumer and social media, which were more interesting for me and much of the audience.

Everyone tries to have a memorable demo, often with a musical number, quasi celebrity or skit. Didn't see YCombinator fans Ashton Kutcher and Demi Moore in the crowd, but one of the presenting companies, Integrate, a customer interaction platform in the enterprise category had co-founder Jeremy Bloom give the pitch (picture on left) Bloom is a former NFL football p 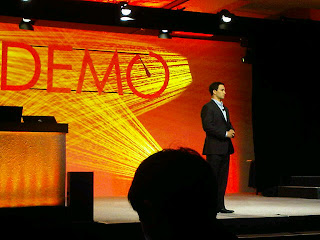 layer, Olympic and World's #1 freestyle skier and star at the University of Colorado. I guess if you've run a pattern across the middle with Ray Lewis waiting to knock your head off, a 6 minute pitch in front of a bunch of geeks is a piece of cake. Didn't get the chance to ask him if managed to visit Berkeley while he was in town and see the 52-7 whupping that the Buff's took at the hands of Cal. Go Bears!!

Day 2 was much more interesting. Jeffrey Mullen of Card 2.0 was the opening act and ended up grabbing the $1M People's Choice award along with one of the five DemoGod awards. You can watch all of the presentations at the DEMO site and can see if you agree with my favorites:

Card 2.0 - A very cool credit card with a programmable magnetic stripe that requires a password entry on the card to show the full card number (for card not present transactions) and enable the card to be swiped at retail locations.

Bump - These guys got 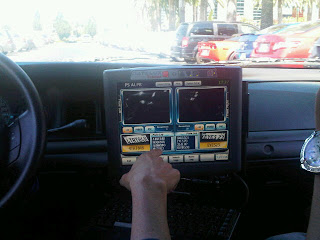 my vote for the People's Choice. Bump.com is a social network based on license plate numbers as the identifier. Imagine the satisfaction of sending a nastygram to the guy who just stole your parking space or texting that hottie you saw for a second at the traffic light. Ok, does enable a whole new way to stalk and lots of privacy issues. I got a chance to ride in the backseat of the car as it drove through the convention center parking lot and logged in license plates at 5 per second (see picture above)

Needly - A cross between Craigslist and Ebay - a better way to sell your stuff and services.

TuneUp - iTunes plug-in that cleans up your music library.

FootFeed - The only Day 1 company on my list. A check-in aggregation platform. I'm anti check-in and have been a conscienious objector in the whole category. However, liked the team, and Dennis Mink, FootFeed's CEO, convinced me of the value in check-ins as a white label service for brands to market to their customers. They also gave an entertaining pitch, with biz dev guy Kemp Mullaney playing the role of a harried guy about to enter the 12-step Check-In program before discovering FootFeed.

Back to the question posed up top. After an enjoyable day 2, maybe DEMO still has some life. I'm not going to write off DEMO completely, but will be surprised if it makes it to 25.
Posted by Steve Bennet at 8:45 AM

Hi Steve. Thanks for mentioning Needly.com. Glad you had a chance to see us at DEMO. We hope to see you again soon.