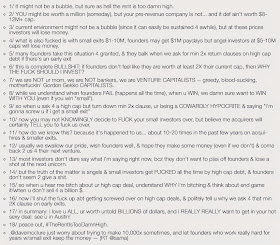 If you are interested in drilling deeper in to this tweetstorm or discussing any other entrepreneurial topics, I am hosting a fireside chat with Dave on April 1 (No Joke!) at the new SJSU Theatre on campus as part of our Silicon Valley Center for Entrepreneurship Eminent Speaker Series.  We are also looking to break the current campus record for most f-bombs in an hour.  The event is free and open to the public.  You can register here
Steve Bennet at 3:33 PM
Share